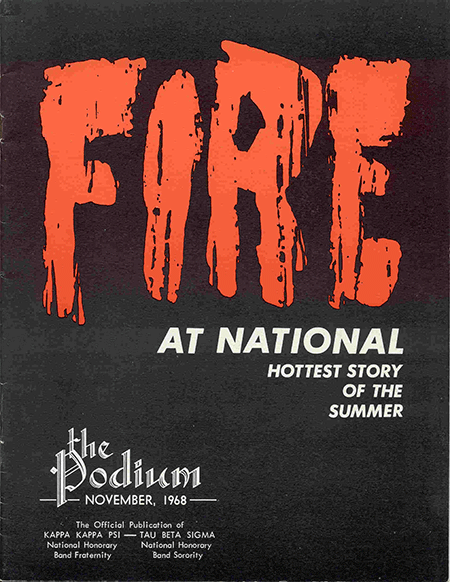 From the Nov 1968 issue of the Podium

Thursday, July 11th at 12: 10 p.m. the Fraternity and Sorority suffered a severe interruption in its normal services. Shortly after the Office Staff had left for lunch, the air-conditioner in our outer office short-circuited and exploded, creating a blast of intense heat and searing flame that accounted for over $9,000.00 worth of damage to jewelry, sweatshirts, paper products, historical records and other office supplies. Although reported immediately by a passing OSU summer session student, and put out within twelve minutes by the on-campus fire department, the damage done was sufficient to close National for over five weeks, and to indefinitely delay compilation and publication of several important Fraternity-Sorority projects.

Damage done to our office equipment, filing cabinets, furniture and fixtures was extensive and virtually all had to be either replaced or refinished. Briefly, the heat melted into unrecognizable shapes one of our IBM Selectric typewriters, our Burroughs calculator, A. B. Dick Mimeograph machine, and a telephone. Over $5500 worth of jewelry was melted in its cases into an unsalvageable mess, and all existing stocks of fraternal banners, sweatshirts, Constitutions, and other paper products were either destroyed by the flames or irreparably damaged by the smoke, water and chemical foam compositions used by the firemen.

The heat was so intense that it buckled the paneled walls in the outer office, and permanently scorched those of the inner office. All plaques, certificates and other display items that had been hanging on the walls were a complete loss, including many of the personal membership certificates of the Executive Secretary. All correspondence that had been awaiting his return from his studies at the University of Arizona was destroyed and there is, to this day, no accurate record of who wrote in requesting what before July 11th.

Fortunately, the asbestos “drop ceiling” specified by Mr. Rubin when the National Office was moved to Crutchfield Hall, prevented the fire from getting completely out of hand and helped to contain it in the two rooms of the National Office.

The Executive Secretary immediately flew back to Stillwater to survey the damage and make the necessary preliminary insurance investigation. He was met at the National Office by the President of Oklahoma State University, Dr. Robert B. Kamm and Dr. Max Mitchell, Head of the OSU Music Department. Together they put plans into motion that would have the Office back into operation by September 1st. Carpenters, electricians and our official suppliers were all contacted and immediate re-orders of jewelry and other essential stock were placed. It was decided that there would be as little interruption and delay caused to the individual Chapters as possible even though we were to operate under difficult circumstances.

A more thorough investigation was undertaken a week later, when Mr. Rubin returned and was able to meet personally with insurance representatives and members of the OSU Staff delegated to refurbish and redecorate the Offices. It was found that our operating records, correspondence files, the Master Rosters of both the Fraternity and Sorority, the original Information Cards and other items stored in our filing cases were relatively safe, with no permanent damage suffered by most of our historical documents . We did loose, however, our entire historical file of the BATON and PODIUM, our complete financial records, both Accounts Payable and Receivable, and other records relating to the financial structure of both organizations. All had been left out on the Accounts Secretary’s desk, where they were being brought-up-to-date, posted and balanced prior to our annual audit. No permanent loss was sustained, however, for a complete financial picture had been prepared the month before for the visit of our National Officers (reported elsewhere in this issue), and within the week all financial records had been completely reconstructed.

National was moved temporarily across the haII to 301 Crutchfield for about four weeks, while 302 was being redecorated. Complete coverage of all damaged items was determined by the insurance adjustor, replacements of certain articles of our office fixtures and equipment, and a complete re-designing of the office was effected by August 15th, far ahead of the September 1st date the University administration had set. Reordered supplies, sweatshirts and jewelry arrived in plenty of time for us to begin the new academic year well-stocked and prepared to serve the Chapters. Things were so well organized and operational that many who wrote in for supplies, assistance, jewelry or suggestions on how to plan for their own Chapter activities during these hectic days were unaware that we had suffered any kind of a setback at all.

But there were some losses in time and scheduling that will be felt for some time. Of most immediate importance was the preparation and publication of a Fraternity-Sorority Directory and an Officers Handbook, both of which were slated for presentation at the beginning of September. Both have had to be rescheduled until after January 1st. The design and approval of new forms for use by various Chapter officers that was to have been distributed early in September has only just now reached you, and several other projects concerned with up-grading, standardizing and up-dating of our operations have had to be put off until after the first of the year.

And for this we ask that you bear with us, as National tries to get the goods and services you have requested out to you as soon as possible. In order to insure that certain projects are expedited, the Executive Secretary has cut back on his travel plans, and will not be visiting certain regions as planned until the Spring semester. However, a newly re-decorated and fully operating National Office is now going full steam, ready to serve you in anyway we can. A hearty welcome awaits any and all members who can stop by for a visit. Come and see us in our new quarters, and be sure and plan to visit during the Golden Anniversary Convention next year.