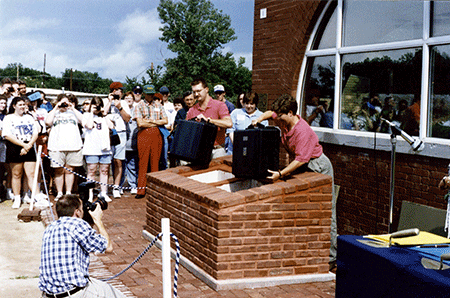 A terrific thunder and lightning storm blew through Stillwater less than an hour before the scheduled Time Capsule Ceremony was to begin. It was reminiscent from the summer’s blockbuster movie, Independence Day, as the sky turned an ominous dark black color, and heavy rain and lightning filled the sky. The National Weather Service told the Headquarters Staff that it was the most intense storm to come through Stillwater all year (and this is in an area of the country noted for severe weather; another blockbuster movie, Twister, took place not too far from Stillwater!!).

Members of the National Councils and National Headquarters Staff were putting together the finishing touches for the script and the ceremony, fearing that the whole celebration would have to be moved indoors. Fortunately, thirty minutes before 4:00pm, the sun came out, and everything was magnificent, as it should have been for this very special occasion.

Over 200 people were in attendance, including many active and alumni members, both National Councils, several members of the Boards of Trustees, Mrs. Barbara Atkinson, representing Sigma Alpha Iota International Music Fraternity, and special dignitaries from Oklahoma State University and Stillwater. Among the active and alumni members present, there was representation from every district. To see so many travel so far for such a special occasion shows the commitment and loyalty in which our members and alumni have for the organizations. Even as we prepared to preserve mementos and information about the present for the future, we were honored to have a first-hand glimpse into our very beginnings by two very special individuals.

“This is a wonderful opportunity to see so many young people come together in a common cause. A common cause is why KKPsi got started in the first place. Boh Makovsky had been here (at OSU) about four or five years at a small college with a small band. He was trying to get it to grow a little bit better, and some of the boys asked if maybe they could help him? What could they do? So Boh and a few of the boys got together, they decided to form an organiza¬tion that would help the band. Eventually, it came to be I was fortunate enough to know nearly all the original 10 members; and some of their sons and daughters played in our band here. These young men, to start out with, were all very dedicated bands-people, as well as, very capable in other fields.”

Mr. Henry went on to talk about how Boh helped him as a young student by giving him a job working in the library. In those days, Boh maintained the library in his home, bought all the music out of his own pocket, and Mr. Henry copied by hand the extra parts that were needed by the band. He recalled that it cost him about $15 a month to go to school for his room and board, and that he would not have been able to remain in school without Boh’s help. The concept of ‘helping’ was the common thread that helped start the Fraternity, and it’s obvious from Mr. Henry’s remarks, that Boh felt strongly about demonstrating that special ‘helping’ spirit to those he taught.

The next speaker was a very special and important person in the hearts and minds of members of Tau Beta Sigma. Wava B. Henry also had strong beliefs and convictions that motivated her to push the ‘established accepted limits’ placed on women by society. Her strength of character and self-confidence led her to the band conducting/teaching profession when it was not considered a ‘lady like’ career choice. Her captivating presentation clearly showed what a special lady she is as she shared with us some of her memories of the beginning of Tau Beta Sigma.

The following is an excerpt of her re-marks:
“In 1939, when I had this brilliant idea, because KKPsi would not let us (women) into their fraternity, I have a dig here and there, by the way; bear with me guys, I do belong to you now!!! I have been taken in with you; after all these years Alpha Omicron did accept me so I Love You too!!!

“Talking about past presidents [all past presidents in attendance were introduced at the beginning of the ceremony. Editor’s note] I’m not a past president, I was the first president…and the reason was there was only three of us, and it was my idea, so I became president. Some of the kids through the years have asked, ‘How come we have a rose?’ and I said, because that’s my favorite flower, and it was my choice! So these were the things we started out at Tech.

“There is no way I can express to you how I feel about you; there’s just no way. But I want you to know how much I have appreciated, and how much I think about it through the years and all the many who have gone before now and later. You’re so special and you’ll always be so special.

“Now I plan to be here when we dig up that capsule; and my problem….I keep talking about this burial ceremony, and I get a little bit touchy about it. I thought maybe we could use another word and if I’m not there in person, I’ll probably be watching from some golf course (in Heaven). They tell me I can play par golf when I get there.

“But I’ll be thinking of you, and I’ll al-ways remember all the many, many things you have given me through these years, and I REALLY LOVE YOU! Not good bye, but, so long ’til 25 years from now.”

Hiram and Wava touched our hearts with their obvious affection for KKPsi and TBS, and their presence added immensely to the Time Capsule Ceremony. Hiram and Wava, we thank you both so very, very much, and we all love you!

Finally, the big moment came when National Presidents Tim Greenwell and Gretchen Buchen unveiled the new vault designed by KKPsi CFR Brian Parker and expertly built by Brian and Dale Croston. Tim and Gretchen buried the Time Capsules in the vault in unison and then jointly placed the brass plaque on the vault commemorating the event.

It was a wonderful ceremony, enthusiastically enjoyed by all. We just knew we had witnessed one of those very special moments that will always remain with us. The celebration continued afterwards with hearty fellowship and Oklahoma Joe’s Bar-B-Que that was out of this world. We only wish ALL of you could have been there with us!