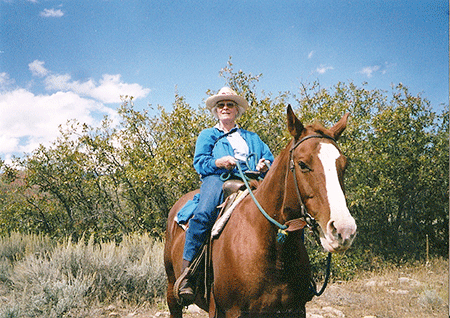 The National Leadership of Tau Beta Sigma is deeply saddened to announce the passing of our founder Wava Banes Turner Henry.

Wava’s energy and love for the Sorority has inspired countless Sisters throughout the years, and as Sisters we will continue to enrich and improve music and band programs across the country. Wava’s drive and dedication is a major influence of diversity in both Music and Band, and both are immeasurably better because of Wava.

Wava’s greatest love was for her family, friends, and all those she mentored over the years. Our thoughts and prayers are extended to her family and to all who were touched by her passion for life.

Wava Banes Turner Henry
from the October 31, 2012 issue of the Aspen Times

Wava Turner Henry passed away on her terms quietly in her home on Oct. 16, 2012. Her body had done all it was going to do, and decided it needed a long rest.

Wava attended college at Texas Tech University in Lubbock, Texas, where she was the first female to receive a master’s degree in music education. She was also the founder of the Tau Beta Sigma Sorority in 1939, a band sorority for college and university band women. Wava was married to Jack Turner from Dec 13, 1941 until his passing in March 1959.Visiting friends in Aspen in the spring of 1961, she was approached by the superintendent of the Aspen schools in the Beck & Bishop Market (in the Wheeler Opera House) and asked if she wanted to teach math in the junior high. She promptly accepted and moved to Aspen from Lubbock, Texas that summer, a widow with a small child.

For the next 20 years, Wava made her mark on the community. She was one of the originators of the nationally recognized Middle School Outdoor Education program, starting the eighth-grade fall Outdoor Ed program in 1968. Along with that, she was a main stay of the Ski Swap. Wava also spearheaded the winter ski program for kids in the Aspen schools, giving both students and teachers an opportunity to ski that otherwise would not be affordable for many.

Transferring to the high school in the mid 70s, her focus shifted from math to guidance counselor. She looked for the potential in all students and guided and encouraged many of them into colleges and careers. The students loved Wava (Mrs. Turner). She was also responsible for producing the high school graduation ceremony as we know it today, at the Music Tent (sometimes without the tent).

Wava lived in Aspen for more than 40 years and during that time helped create and sustain some our communities enduring traditions. Wava’s passion was her family, golf, football and the sisters of her sorority, Tau Beta Sigma. Wava lead a huge life and made a difference to those she came into contact with. She will be missed but not forgotten.

Wava married Reese Henry on March 1, 1981, in Aspen, Colo. She and Reese were residents of Grand Junction for the past six years, and before that lived in Aspen and Midway, Utah. Wava is survived by her husband, Reese Henry, of Grand Junction; daughter and son-in-law Roderick and Sandra Turner Weese of Midway, Utah; three grandchildren, three great-grandchildren and twins (great-grandchildren) due in March 2013. A memorial service for Wava will be held in the spring of 2013 in Aspen. Memorial contributions can be made to Hospice & Palliative Care of Western Colorado; 3090B N. 12th St.; Grand Junction, CO 81506.